Over the past couple of weeks, as the date for my transplant approaches, I have found myself in a state of panic.  I was worried about so many things...so many "what if" scenarios.  It was driving me crazy.  I'd think about the future and become so scared that I'd actually start to cry.  I think I was driving my husband insane.  He would hold me and tell me that everything was going to be okay.  He's been my rock.

Yesterday a lot of people I know--and many I don't know--fasted and prayed that my lab test would come back with a result that will finally allow me to have the transplant.  My sister Michelle called me and told me that just about everyone in her ward was fasting for us.  She told me that it was one of the first times in her life that she actually knew what it felt like to "feel" people praying for us.  I'm so grateful.

I felt at peace all day yesterday.  Going without food and water for a day is difficult for anyone, but we did it.  Ian and Courtnie joined us, too.  I hope that they learned that they can do hard things, especially when you are doing them for someone you love.

This morning I woke up and felt so good.  "Peace" is hardly the word to describe it, but it's the best word I have.  I had this overwhelming feeling that everything is going to be okay--come what may.  My worries are gone, and I have turned my worries over to the Lord.  As I laid in bed thinking of the future, John 14:27 came to my mind:


"Peace I leave with you, my peace I give unto you:
not as the world giveth, give I unto you.
Let not your heart be troubled, neither let it be afraid."
﻿I felt my Saviors love for me so strongly.  I know that He knows my troubles, and I know that He has experienced the pain that I am going through--both physically and emotionally.  I am so grateful that He has taken me by the hand and is guiding me through this time.  I hope that I can live worthy of His love.
Posted by Amie Cobb at 11:20 AM 2 comments: 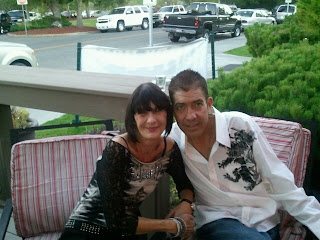 My cousin Eric passed away yesterday.  He was only nine months older than me.  He died suffering from severe liver and kidney failure.  I can't imagine...

Eric and I were kids together.  I have some fun photos of he and I playing in the back yard at my aunt's house in Idaho Falls.  Some of them wouldn't be appropriate to show to anyone! :)  I guess they didn't make swimming suits for babies back then!

Eric was always the cool cousin.  His mom was (and still is) very beautiful and stylish, and Eric was always dressed in the coolest clothes.  He had a very funny and outgoing personality and ALWAYS had a goofy grin on his face.

When I broke up with my boyfriend my junior year of high school, Eric came to Utah and took me to our Homecoming dance.  He was a good sport about it, and it was really fun...

I've spent the last little while thinking about the last time I saw him, and I think it was that date.  He hasn't been to either of our grandparent's funerals and I've wondered why.

It turns out that he's been battling some pretty vicious demons.  I had no idea.  I wish I had known--not that I could have done much about it, but so that he could have had someone else praying for his recovery.  I wish I knew what set him on this course of self-destruction, and I wish I could have been more helpful.  I love him, and miss him as a part of my life.

This event has got me thinking a lot about choices.  If you've read my blog at all, you know I'm a big proponent of choice in every aspect of life.  Each of us comes to earth with a certain amount of potential, and it's up to us how we choose to develop it.  What sets people off down the wrong path?  Is it friends?  Outside influences?  Or do we have complete control over every aspect of our life?

I believe 100% in the concept of agency--that every choice we make in life has a consequence, be it good or bad.  I wish Eric had made better choices.  I hope that he's making them now and has the opportunity to right the wrongs in his earthly life. I have to believe that we all get second chances.
Posted by Amie Cobb at 11:10 AM No comments:

An Email to Gram

Gordon asked me to email you with exactly what my issues are regarding my (hopeful) upcoming transplant. I'm very worried about it, and am so grateful for those who would like to fast on my behalf tomorrow. It means a lot to me, and I know that our Heavenly Father will hear our prayers.

As most of you know, I had cancer as a child. This was during the late 1970s before they started testing blood more carefully for viruses. During the course of my treatments, I had a lot of blood transfusions, and I'm fairly certain that's where I picked up the lovely hepatitis B virus. I didn't know I had this until I started dialysis when my kidneys shut down in December of 2009.

When I started my evaluations for a kidney transplant at Mayo Clinic, I met with a hepatologist (liver doctor), who told me that I could take medications to suppress the virus so that it would be undetectable. I did this for a few months, and was finally cleared for transplant last November. I thought that once I was cleared, I wouldn't have to take the meds anymore, so I stopped.

Since then, I've had other complications, but was cleared again for transplant in February. They tested my hepB level again at that time and the viral count was higher than it had ever been. This set me back yet again, as if I were to have the transplant with my viral count at a detectable level, the anti-rejection drugs I'll have to take for the rest of my life would have let the virus multiply and destroy my liver. I've been on the anti-viral meds again since February, and while the count is trending downward, it still isn't good enough. It started at almost a million in February, was at 500,000 in March, 1800 in April, and was at 1000 on May 10. The hepatologist wants it at ZERO before he'll clear me for transplant.

My transplant is currently scheduled for June 14, and I will have my count tested again on June 7. If I want to go back to work teaching band at the end of July, I absolutely HAVE to have the transplant done on the 14th. I've been told by my district office, that if I don't have the surgery in June, they will find someone else to fill my position. I love teaching, and so desperately want to get back to work! I also want to feel good and be a better wife and mother. Of equal importance to me is to have this done so that my sister (who is my donor) can get on with her life...we've been in limbo for so long!

Anyway--a long explanation as to why we're fasting tomorrow. I have had the power of fasting and prayer work in my life before, and I know it can work again. I need the lab test on Tuesday to come back with a positive result so that this transplant can finally happen.

Love you all. Thanks so much for all of your prayers, faith and love.

While Ian is gone on our stake's pioneer trek, Courtnie and I have been enjoying some "girl time."  Yesterday we went to see the movie "Soul Surfer," a movie she's been wanting to see for a while.

The movie had a lot of references to religion and Jesus Christ, which made for a great discussion with Courtnie afterwards.  One of the Biblical references that was used was Philippians 4:13, which says, "I can do all things through Christ which strengtheneth me."

The girl in the movie was a championship surfer who was training for the national championships when she was attacked by a shark and had her arm amputated at the shoulder.  She had to learn to do everything over again, and felt sorry for herself at times.  Her father (also a surfer) kept telling her that she shouldn't give up, and quoted the above scripture.

A little while after her accident, her church youth group went to Thailand right after the tsunami in 2004.  This helped her to put her trial into perspective as she saw the devastation around her.

I have 12 days left until my scheduled transplant.  I'm still not where I need to be with my viral level, and I'm so scared that this will mean another postponement.  In February, my count was near one million, a month later it was cut in half, at the beginning of May it was at 1800, and on May 20 it was at 1000.  It needs to be at zero for the doctor to clear me for surgery.  I'm having another lab drawn on June 7, and if it's close we can draw it again on May 10, but that's it.

If I don't have the surgery on June 14, I won't be recovered in time to start school in August.  The HR director has informed me that if I can't start the school year, he's going to have to find someone else for my position.  This devastated me.  Other than feeling better, the thing I'm most excited about is being able to go back to work.  I miss it so much.

Putting things into perspective--will it be the end of the world if I don't work next year?  Will I be able to find fulfillment elsewhere?  Would I be able to come back to what I love?

Are there people suffering more than I am?

Am I worrying needlessly?

I'm trying so hard to have faith that things will turn out as I'd like them to, but I've wanted that since last November.  For some reason, things just don't always work out that way.