For Ian's birthday this year, he and his friend Cody went to an Arizona Sundogs hockey game. Because his mom is soooo cool, she was able to get Ian and his friend in early to sit on the bench and watch them warm-up. Does he have the greatest mom in the world or what??? 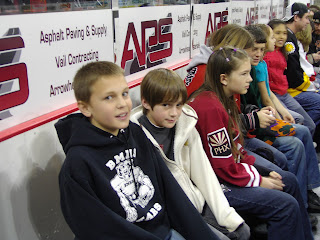 The Sundogs are a semi-professional team that is in its second season in Prescott Valley. They built a hockey arena a couple of years ago. It's going to be used for a new arena football team this spring. Kind of cool for our little town. 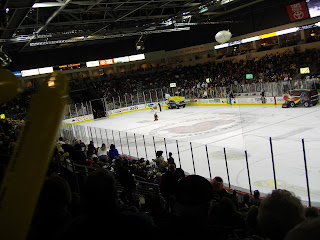 Thoughts on kids growing up

So my little boy turns 11 on Monday. I feel old. I'm really not that old, but having an 11 year old makes me feel that way.

Now look at me--when I get in the car, all I want to do is listen to talk radio. What a geezer!! :^B

The music he listens to isn't all that bad, per se. I worry about him listening to some of the music my students listen to. Gordon and I have had long talks with him about the power of music and the influence it can have on your life. I look at some of my students who listen to what I describe as "hate/scream" music and what kind of kids they are. They have little to no regard for authority and just seem to be in a bad mood all of the time.

For a while at the beginning of the school year, I listened to the "Hairspray" soundtrack almost every day. (By the way, if you don't have that, you really should get it...it's really fun.) When I would listen to it on the way to school I couldn't help but be happy. It put a spring in my step and a smile on my face. I should go back to listening to it...I've been so grouchy lately.

He's growing up, and next year he'll be a Deacon. How strange is that. I look at those boys now, and they look so much older than Ian. Granted, Ian is a bit smaller than most boys his age, but the Deacons just look big. It's weird to me to think that in a few months Ian will be up there passing the Sacrament. Odd...

Courtnie is huge. I mean huge. Even though she's 4 1/2 years younger than Ian, they are only about an inch apart. We just bought Courtnie new shoes and she's wearing a size 2. I don't think I wore a size 2 until I was in the 6th grade. Luckily she stays active and is still slender. The thought of having an overweight kid scares the crap out of me. I see how they're treated in school and I would hate for my kids to have to go through that.

Okay...I guess I'm done for today. If you read this before Monday, February 25, call us and wish Ian a Happy Birthday. I'm sure it would make his day.
Posted by Amie Cobb at 11:29 AM No comments: 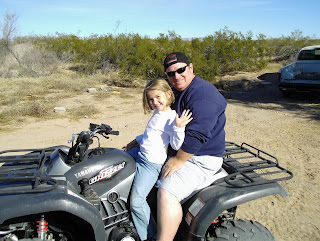 Gordon and Courtnie quadding with the Robinson clan. Courtnie loves to go FAST!! 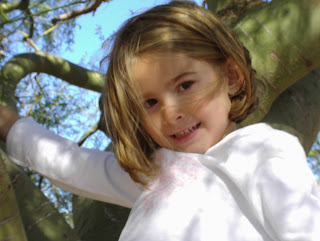 This is an older picture...I'd forgotten how short her hair was. I miss it! She wants it long, but it's so cute short. 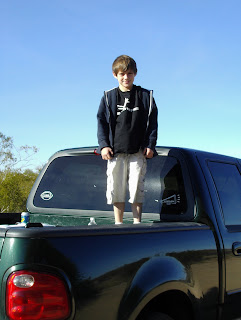 Ian wearing his "I do all my own stunts" shirt, which is SO appropriate for him! 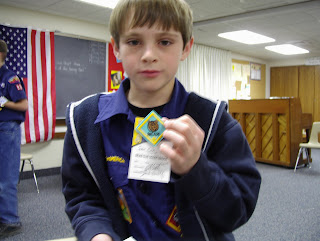 Ian loves Cub Scouts. He'll be 11 next Monday and will be an 11 year-old Scout. We bought him his new Scout shirt and a bunch of Scout stuff for his birthday. 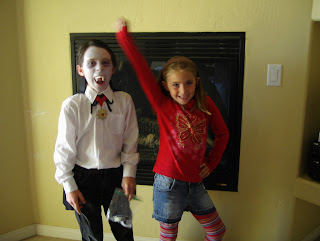 Ian and Courtnie--Halloween 2007. Ian was a vampire (complete with black hair dye) and after many attempts to find the right Hannah Montana outfit, this was the best we could come up with. She decided that she was just a "pop star" and not Hannah Montana.

So here I am, entering the world of "blogging." We'll see if it merits anything...

A bit about myself:

I am a 35 year old female band director in the great state of Arizona. I teach high school band in a semi-rural community. I have a wonderful husband and two great kids (ages 11 and 6.) I am a childhood cancer survivor--I had rhabdomyosarcoma at the age of 6--so this blog may contain a bit about my struggles with the late-term effects of that.

In addition to all of that, I am also a member of the Church of Jesus Christ of Latter-Day Saints. (Yep, I'm a Mormon.) :^)
Posted by Amie Cobb at 12:32 PM No comments: